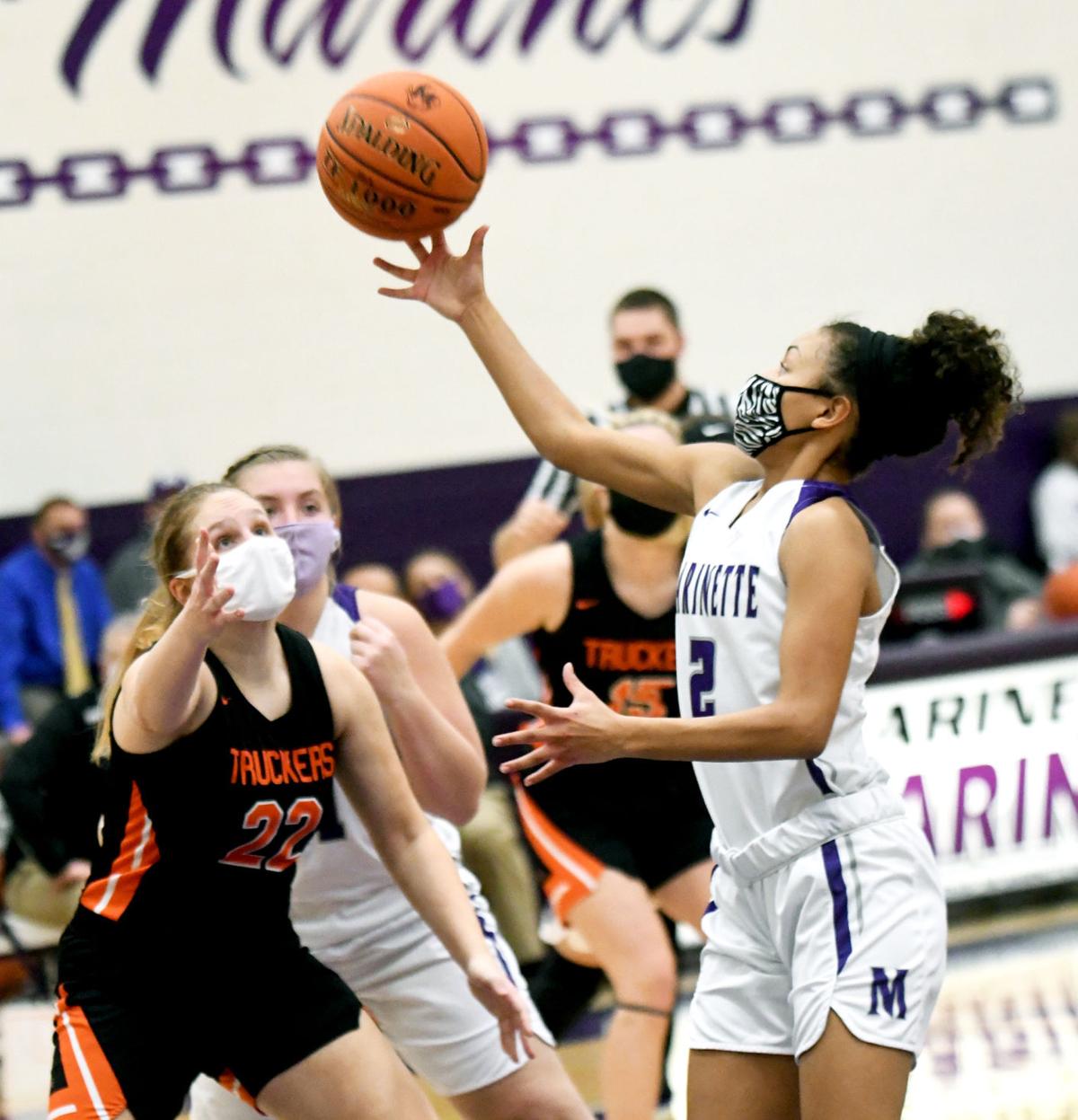 Marinette’s Amara Smalls releases the ball as a Clintonville defender closes in during the Marines’ North Eastern Conference game Monday in Marinette. 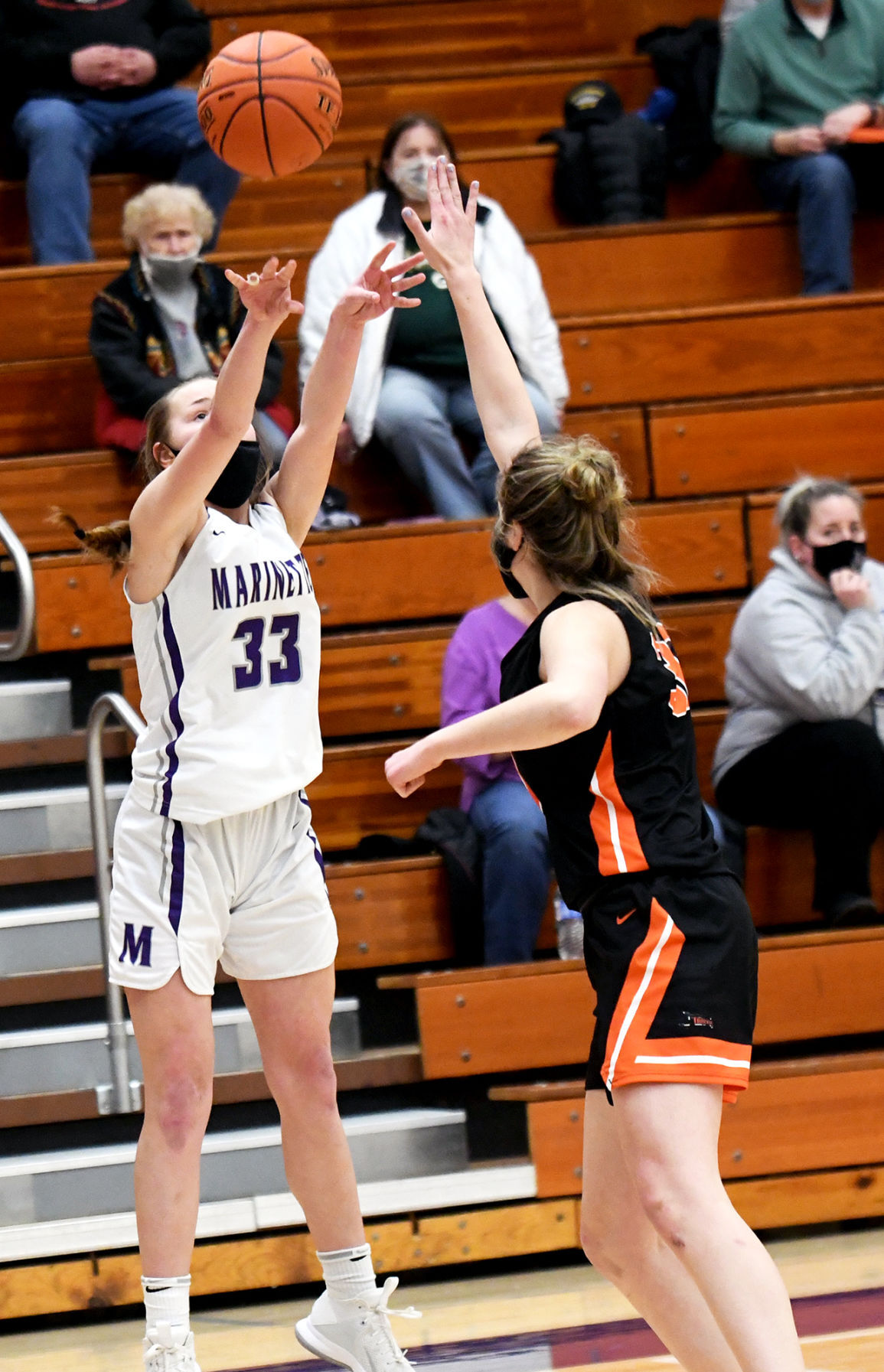 Marinette’s Rylee Hansen fires off her shot as a Clintonville player attempts to defend during the Marines’ North Eastern Conference game Monday in Marinette.

Marinette’s Amara Smalls releases the ball as a Clintonville defender closes in during the Marines’ North Eastern Conference game Monday in Marinette.

Marinette’s Rylee Hansen fires off her shot as a Clintonville player attempts to defend during the Marines’ North Eastern Conference game Monday in Marinette.

MARINETTE—The Marinette girls basketball team once again had a North Eastern Conference opponent on the ropes, but for the second straight game an offensive outburst by the opposition forced the Marines to fight an uphill battle that ultimately resulted in defeat.

Just two days after seeing a 20-11 halftime lead disintegrate into a loss against Luxemburg-Casco, Marinette (0-8 NEC, 0-11 overall) picked up right where it left off defensively against Clintonville (4-6 NEC, 4-8 overall) as the Marines outrebounded the Truckers early to take a 9-7 lead seven minutes into the first half.

“Clintonville is a talented team. We played them a week ago (a 53-23 Marinette loss on Jan. 5 at Clintonville) and I would have liked to see more improvement in certain aspects of the game that we struggled with in that game,” Marines head coach Zac Barker said. “An area we need to work on is our consistency on our box outs on the defensive end. At points, we were doing a very good job pulling two or three in on the box out and you could see the paint pretty much cleared out. Other times we just had people jumping straight up and down and Clintonville was getting two or three opportunities in the paint”.

The Truckers took an early 5-0 lead behind a layup by Jordan Lehman along with a 3-pointer from Selina Torrez but the Marines quickly made it a one-point game thanks to an Amara Smalls’ layup and a floater by Sam Pieper off an inbounds pass from Matti Renikow.

After Hannah Strong knocked down a two-handed layup that put Clintonville ahead by three, Barker called a timeout to settle his team down and set up the next play. Coming out of the break, Jordan Boettcher took the dish from Pieper at the top of the key and barreled her way into the paint for a layup, drawing contact and the foul on her shot, before knocking down her ensuing free throw to tie matters up at 7-7 at the 12:10 mark.

Marinette took the lead after Boettcher stepped into the lane and intercepted a Clara Kasson pass for a steal before finding Pieper on the outlet pass for an easy fast break layup. The Marines’ advantage was short lived, however, as Kasson swished a trey from the right corner while Emily Taylor knocked down a long two-pointer that gave Clintonville a 12-9 cushion with 9:47 left in the half.

Smalls cut Marinette’s deficit to one with a mid-range jumper but a trey from Strong kicked off a 6-0 run for the Truckers and forced another Marine timeout with 5:36 left until halftime.

After a tip-in by Taylor and a layup from Jasmine Wilson put Clintonville on top by 11, Smalls clanged home another jumper but Strong stroked another 3-pointer to make it a 25-13 contest.

The two teams traded points as Hannah Chenier added a basket while Taylor added a put-back until Pieper drilled a triple from the right corner that cut Clintonville’s lead to nine with 1:05 left until halftime, but the Truckers closed on a 5-0 run to take a 32-18 lead at halftime.

After playing Clintonville six days prior, Barker said that the Marines showed improvement from that game to Monday’s contest.

“We made improvements from the last time we played these guys, especially in getting to the free throw line,” he said. “The last game we didn’t attempt a single free throw and tonight we got nine of them, even though Jordan was the only one able to find her way to the foul line tonight. Overall offensively we executed and got some good looks and hopefully our players keep at it, keep improving and keep getting into that rhythm offensively”.

Marinette began the second half on its heels after back-to-back baskets from Lehman until Chenier knocked down a jumper to make it a 38-20 game. A corner-trey from Strong put the Truckers ahead by 21 and resulted in Barker calling a timeout just two minutes into the half.

Whatever defensive adjustments the Marines made during the break proved to be moot as free throws from Torrez and Strong along with buckets from Lehman and Isabela DeJesus pushed Clintonville’s advantage to 28 before Smalls stopped the bleeding with a triple from the right corner. Chenier added a put back while Renikow sank a layup as the Marines continued to chip away, but a 3-point bomb from DeJesus gave the Truckers a 51-27 lead.

After not attempting a free throw in the first half, the Marines knocked down their first shots from the charity stripe as Boettcher canned her first four shots from the line to make it a 22-point game and force the Truckers to call timeout with 9:20 left on the clock.

Marinette’s offense stayed on the attack with Boettcher knocking down a turnaround jumper while Rylee Hansen stepped in front of a Clintonville pass for the scoop and score as the Marines cut the lead to 18. Another corner-triple by Pieper along with a runner from Chenier pulled Marinette within 15 with 5:50 left to play, but Strong splashed her fourth 3-pointer of the game while Lehman tacked on layup to push Clintonville’s lead up to 20.

The two teams exchanged free throws with Boettcher and Wilson each knocking down a pair before Lindsey Wingender swished a triple from the top of the arc to make it a 17-point game with 2:20 left to play. Wingender tacked on Marinette’s final points off a jump shot while Natalie Sunita added one final basket for the Truckers as time expired to send the Marines to their thirteenth consecutive loss.

Despite the final score not being in their favor, the Marines featured a balanced offensive attack against Clintonville with seven different players finding their way onto the stat sheet. After the game, Barker said that his three senior leaders were beginning to take ownership of the offense.

“I like the chemistry that is building between Matti, Sam and Jordan. Those three seniors have played a lot of basketball together and I think that they’re starting to take matters into their own hands. They’re improvising on a lot of plays and working together. When a play breaks down, they’re looking for each other”.

Boettcher led the Marines in scoring with 11 points while Pieper backed her up with 10, Smalls chipped in nine and Chenier tacked on eight. Strong’s 15 points paced Clintonville while Lehman and Wilson each finished with 10.