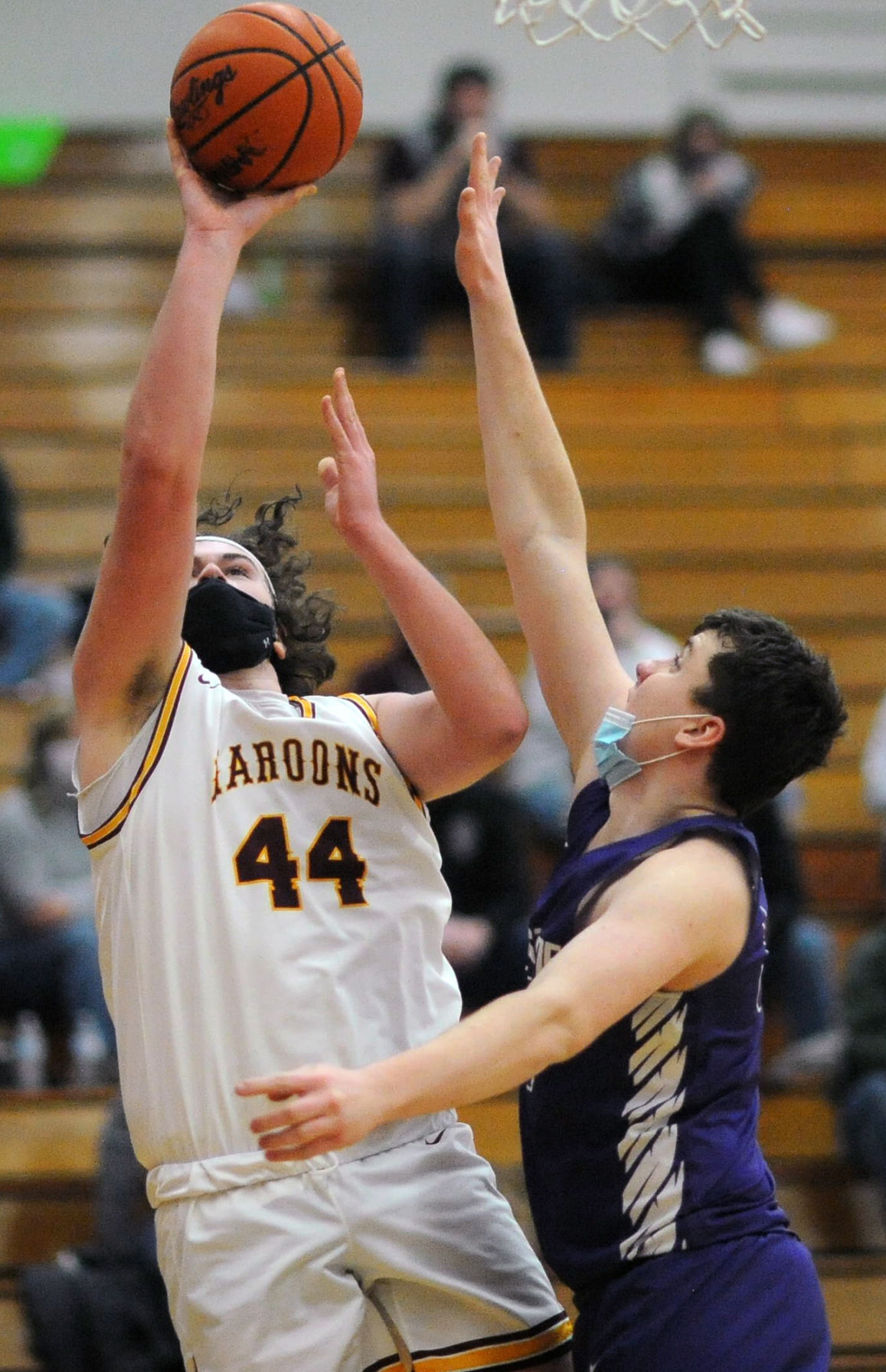 Menominee’s Cooper Conway shoots over a Gladstone defender during the second half on Friday against the Braves. 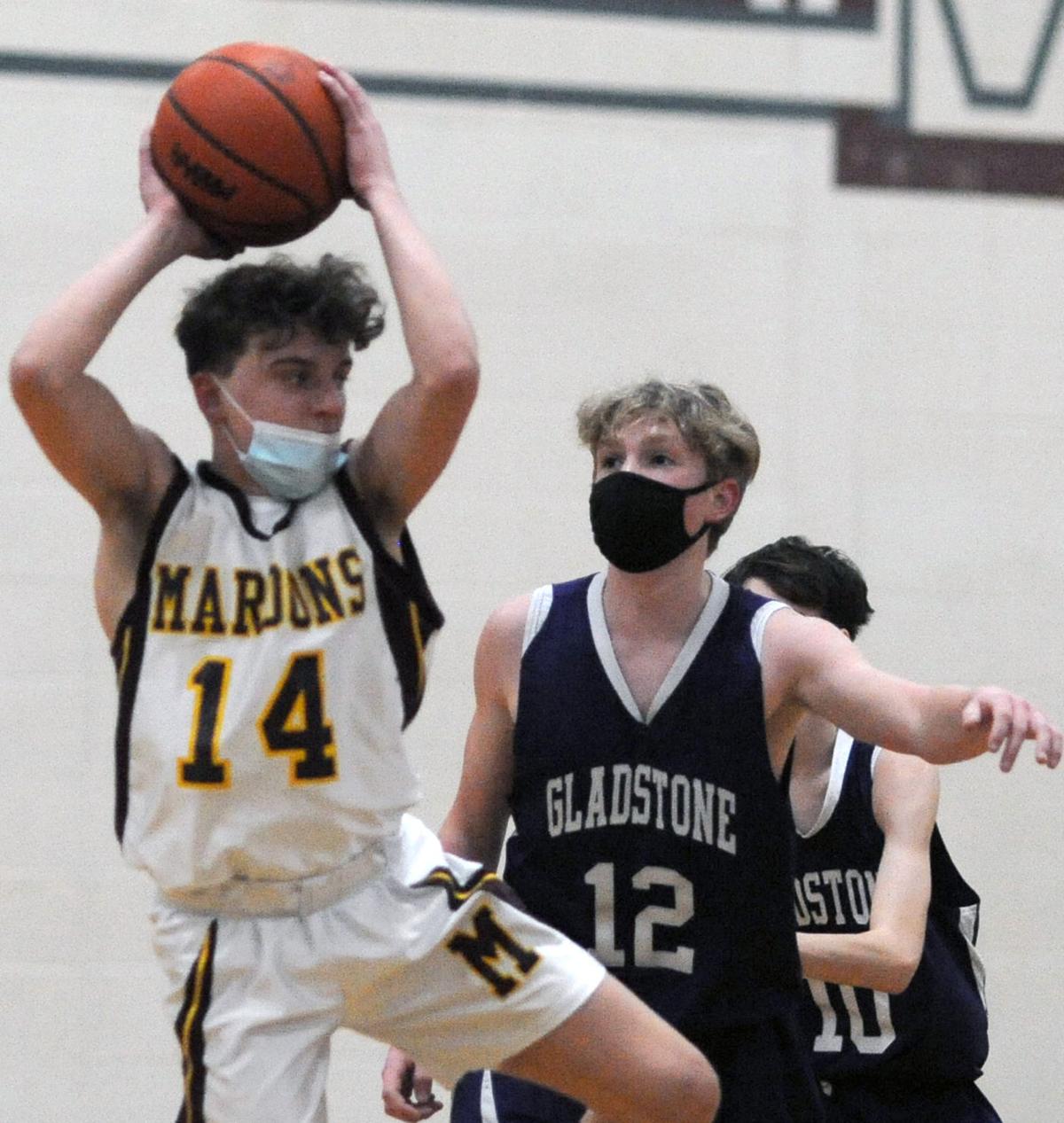 Menominee's Aaron Brunelle looks for someone to pass to during Friday's freshman game against Gladstone at Blesch.

Menominee’s Cooper Conway shoots over a Gladstone defender during the second half on Friday against the Braves.

Menominee's Aaron Brunelle looks for someone to pass to during Friday's freshman game against Gladstone at Blesch.

MENOMINEE—It was a tale of two half’s for the Menominee boys basketball team in Friday nights Great Northern Conference matchup against Gladstone.

The Maroons came out of the gates showing a lot of energy and were able to build a 37-23 halftime advantage by turning their defense into offense and getting baskets in transition, but the Braves tightened up their play in the second half, were able to tie the game at 58 late in the fourth quarter and eventually grab a 76-72 double-overtime victory.

“Everything that we did in the first half to get a 14-point lead, we didn’t do in the second,” Menominee coach Sam Larson said. “We took away (Sam) Ballard and (Rane) Castor in the first half, played good defense and got out in transition, and we just didn’t get that and that hurt us. There were so many little things that we didn’t do defensively that we’ve worked on with some of our guys for three or four years now, and we didn’t execute it correctly tonight.”

One of the main reasons Gladstone was able to come away with the win was the play of Sam Ballard in the second half after he struggled in the first, scoring just 10 points (all in second quarter) and turning the ball over seven times.

After halftime, however, Ballard poured in 26 points including 15 in the overtime periods for a career-high 36 points to lead the Braves’ comeback win.

“(Sam) was huge in the second half,” Gladstone coach Mike Cretens said. “He had tough bucket after tough bucket towards the end of the game and we couldn’t have done it without him tonight.”

The game stayed close through the first four minutes until Menominee used a 10-2 run to end the half highlighted by a pair of alley-oop layups from Aidan Bellisle and Brady Schultz to hold a 19-9 lead after the first.

In the second quarter the Maroons started to get out in transition a little more and Brady Badker was the beneficiary as he had seven points in the quarter and he and Bellisle headed into halftime leading the Maroons with 11 points each and leading Gladstone 37-23.

“We were really pleased with the first half. The last couple of days that’s all we’ve talked about is getting a quick start, and we came out with a lot of intensity and started jumping on them from the opening possession,” Larson said.

“Usually after a slow start, we would kick in on in the second half and this time it was the opposite. The goal for us is going to be to take this and try to put a full game together.”

Menominee grabbed its biggest lead of the game to start the second half as Schultz and Bellisle scored two quick buckets to go up 41-23, and slowly but surely from there the Braves started to mount their comeback.

Ballard made a pair of free throws with 5:54 remaining in the third quarter, and a few possessions later after a Menominee turnover Ryan Polley swished a 3-pointer from the right wing to cut the deficit to 43-30 and Castor followed up with a baseline drive to get within 11.

A triple from Menominee’s Brody Waara bumped the lead back to 14, but Gladstone cut it to single digits with a baseline drive from Lucas Hughes and another triple from Polley from nearly the same spot to get the score to 46-37.

After a Menominee timeout with 1:19 left in the third and the score at 46-39, Castor nailed a trifecta from the top of the key, and frustration started to get the better of the Maroons as they were assessed a technical with 31 seconds left and Ballard split the free throws to get within three.

After keeping possession due to the technical, Menominee lost Polley once more as he got free in the right corner for an open look and he cashed his third 3-pointer of the quarter to tie the game at 46. Menominee was able to swing a little of the momentum back in its favor as Badker hit a contested corner trey at the buzzer to take a 49-46 lead, but Gladstone ended the quarter on a 14-3 run to make for an exciting fourth quarter.

“Polley knocking down those shots kind of ignited their offense, but there were so many defensive mistakes by us,” Larson said. “They got so many rolls off a ballscreen where we just didn’t show, and that gave them basket after basket.”

Just over a minute into the fourth quarter, Bellisle split a pair of free throws to give Menominee a 52-48 lead, but Gladstone went on a 6-0 run after that to take its first lead of the game on a basket inside from Hunter Potier with 4:20 left to play.

Cooper Conway tied the game at 54 with a basket in the paint after a nice drop-off from Bellisle, and a transition basket from Ballard was matched by one from Badker after a steal by Menominee freshman Trevor Theuerkauf to keep the game tied with under two minutes on the clock.

Ballard again came up big for Gladstone with a strong drive to the hoop for a basket, but Badker did the same for Menominee as he scored in the paint after Schultz saved the ball from going out of bounds right into his hands with 46 seconds left.

A big moment in the game came just 11 seconds later as Schultz picked up his fifth foul, sending him to the bench for the remainder of the game after scoring 11 points with nine rebounds, three assists, a block and a steal.

With 6.5 seconds left, Gladstone was trying to inbound the ball but couldn’t find anyone open and was called for a five-second violation to get the ball back to Menominee with a chance to win, but the Maroons last shot bounced off the rim and the teams were headed to overtime.

The two teams traded baskets in the first overtime, and with 25.4 seconds left Ballard converted a three-point play to take a 67-64 advantage.

Needing a 3-pointer, Menominee turned to Bellisle and he clutched up, knocking down his only triple of the game to tie it up with 10.4 to go and send it to another OT.

In double-OT, Ballard started it off with a tip-in and Badker tied it up with a pair of free throws with 2:24 to play, but two straight baskets and a pair of free throws from Ballard with 49.6 left gave Gladstone a 75-69 lead. Menominee’s final three points came on a free throw from Zach Starzynski and Conway grabbing an offensive rebound and putting it up for a basket.

“In the second half, when we started switching up our defense and taking care of the ball I think that really threw off (Menominee’s) rhythm,” Cretens said. “They want to push, get up the court and get easy buckets and we didn’t allow them to do that and it sent them for a little bit of a loop.”

Badker notched his second straight 20-point game to lead Menominee in scoring while Bellisle added 17 and seven assists and Conway recorded his first double-double of the season with 17 points and 12 rebounds.

“I thought Cooper had a really good game, and we probably have to find ways to start getting him the ball more,” Larson said. “He’s very efficient, he rebounds well, he’s strong with the ball and has a nice outside shot so he’s a tough matchup problem for opposing defenses and we have to do a better job of finding ways to be creative and get him the ball.”