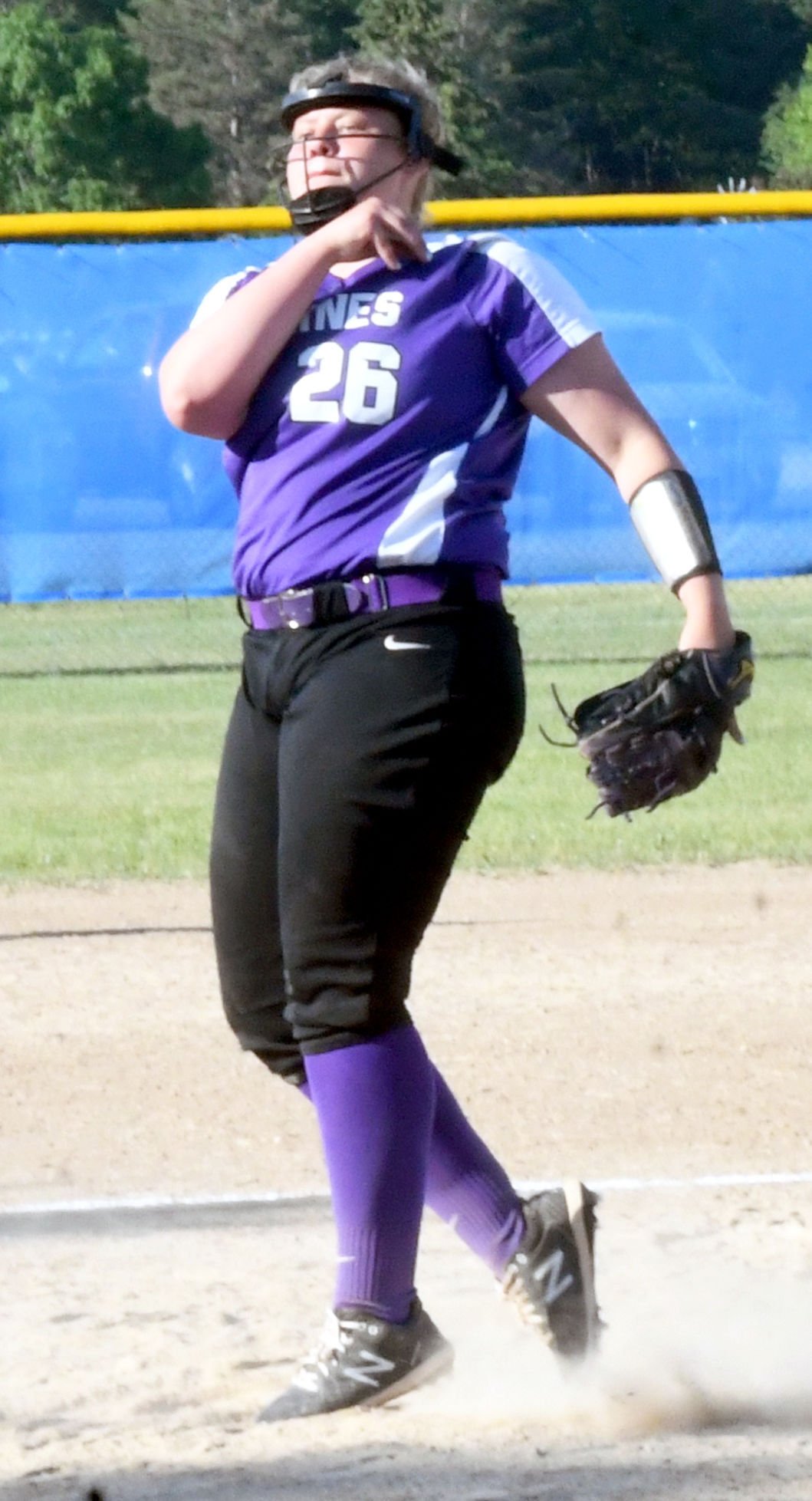 Marinette’s Sydney Nemetz uncorks a pitch against Peshtigo on June 9. Nemetz has been named the North Eastern Conference Player of the Year and also received First Team All-NEC honors after helping to lead the Marines to the school’s first-ever state tournament. 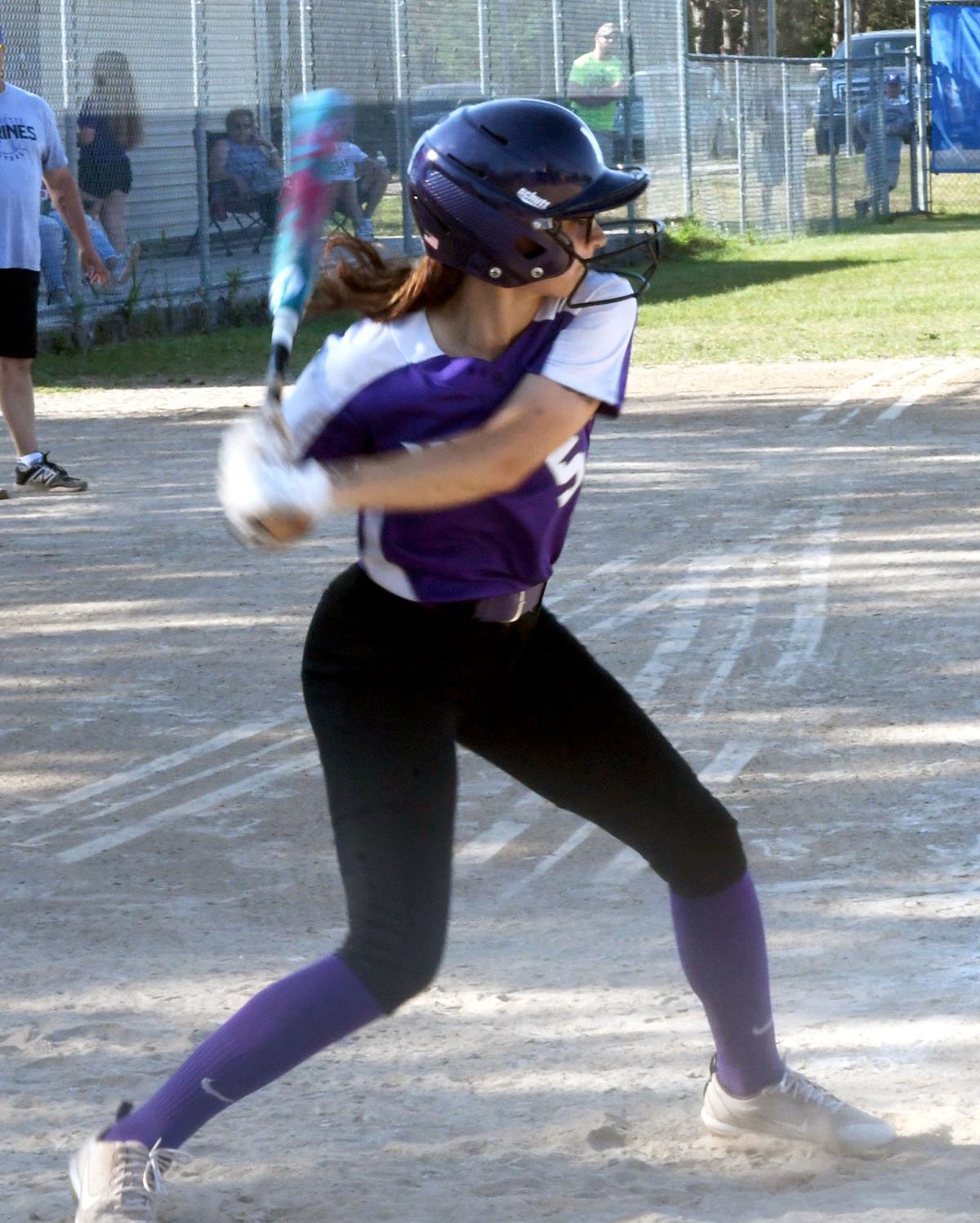 Marinette’s Hanna Ebsch squares up on pitch against Peshtigo on June 9. Ebsch has been named Second Team All-North Eastern Conference, one of six Marine softball players to earn postseason recognition.

Marinette’s Sydney Nemetz uncorks a pitch against Peshtigo on June 9. Nemetz has been named the North Eastern Conference Player of the Year and also received First Team All-NEC honors after helping to lead the Marines to the school’s first-ever state tournament.

Marinette’s Hanna Ebsch squares up on pitch against Peshtigo on June 9. Ebsch has been named Second Team All-North Eastern Conference, one of six Marine softball players to earn postseason recognition.

MARINETTE—Sydney Nemetz spent the season mowing through any and all batters in the North Eastern Conference (NEC), and her dominant senior season has resulted in Nemetz being named the NEC’s Player of the Year.

Nemetz, who was also named First Team All-NEC, is one of six Marine softball players to receive postseason recognition after a dream season for Marinette.

The Marines finished the season with a 19-7 record (14-4 NEC) and defeated Freedom 3-2 to win the WIAA Division 2 Regional championship before claiming the Sectional crown with a 5-4 triumph over Denmark. That victory sent Marinette to its first-ever state tournament, where the Marines fell to Baldwin-Woodville 4-1 in the semifinal round.

Nemetz was the very definition of an ace for Marinette in her senior season, leading the NEC with 170 strikeouts. She went 9-4 in the regular season with a 1.19 ERA. Nemetz was even better during the Marines’ postseason run, where she pitched all four of Marinette’s playoff games and racked up another 46 strikeouts. Nemetz was also a threat with the bat in her hands, hitting .450 in the clean-up spot in Marinette’s lineup.

“Syd was a dominant pitcher for us this year. She really shined when the playoffs started and led us to our first state tournament, and she has a great bat,” Marines coach Scott Macintyre said.

She wasn’t the only impressive pitcher for Marinette, as senior Bailie Thielen earned Second Team All-NEC recognition after going 5-0 with 26 strikeouts and a sterling 0.61 ERA, allowing only two runs across five games. Thielen also hit .300 at first base.

“As a coach, you don’t get this lucky where you have the two best pitchers in the conference. Bailie had such a great attitude approaching this season. Her biggest goal was to win and if that meant splitting time on the mound, so be it,” Macintyre said. “She worked her tail off in the offseason to become a better hitter and it paid off. She was an anchor at first base for us all season.”

Nemetz and Thielen’s battery mate, senior Matti Renikow, was named First-Team NEC at the catcher’s position. A feat made even more impressive by the fact that she played the entire season injured.

Renikow socked an NEC-leading 10 homeruns and finished the year batting .425. She came up with clutch hits all season long, including a walk-off homer against Denmark on May 13 that gave Marinette a 5-3 victory.

“If you watched her play this season, you’d have no idea she was injured,” Macintyre said. “Matti always came up big in big games. She was a wall behind the plate and an unbelievable bat in our lineup.”

Clutch hits were something that senior Hanna Ebsch delivered in spades for Marinette.

Ebsch earned Second Team All-NEC (outfield) honors after patrolling the outfield for the Marines from her centerfield position. She solidified her place in Marinette sports history with a three-run bomb against the Vikings in the Sectional championship that punched the Marines’ ticket to the state tournament, finishing the season with a .295 batting average.

“Speedy is a great centerfielder. She has an unbelievable arm and reads the ball off the bat so well,” Macintyre said. “She’s a great leader and has anchored our outfield since she was a freshman. She also has a knack for big-game excitement.”

If one looked up “versatile” in the dictionary, they may well see a picture of Maya Carviou. The senior, an outfielder by trade, made Second Team All-NEC at the shortstop position and produced offensively no matter where she hit in the lineup, hitting .295.

“Maya is a young lady that will play anywhere to help the team win,” Macintyre said. “She made some great plays over the year that I will never forget. She started the season batting in the No. 2 spot, but I moved her into the lead-off spot for the playoffs and she came up with big hit after big hit.”

While Marinette bids farewell to those five seniors, the future is bright for Marines’ softball and freshman Wynn Erdman is a big reason why.

Erdman earned All-NEC Honorable Mention (outfield) after starting the season on the JV team. COVID-19-related issues forced Macintyre to promote Erdman to varsity and the youngster responded, hitting .400 and showing a flair for the dramatic after hitting the go-ahead homerun in the Regional championship game.

“Wynn’s impact was immediate. She came up with big hit after big hit and played great defense. She showed that the game was never too fast for her. We’re looking forward to big things from Wynn in the future,” Macintyre said.