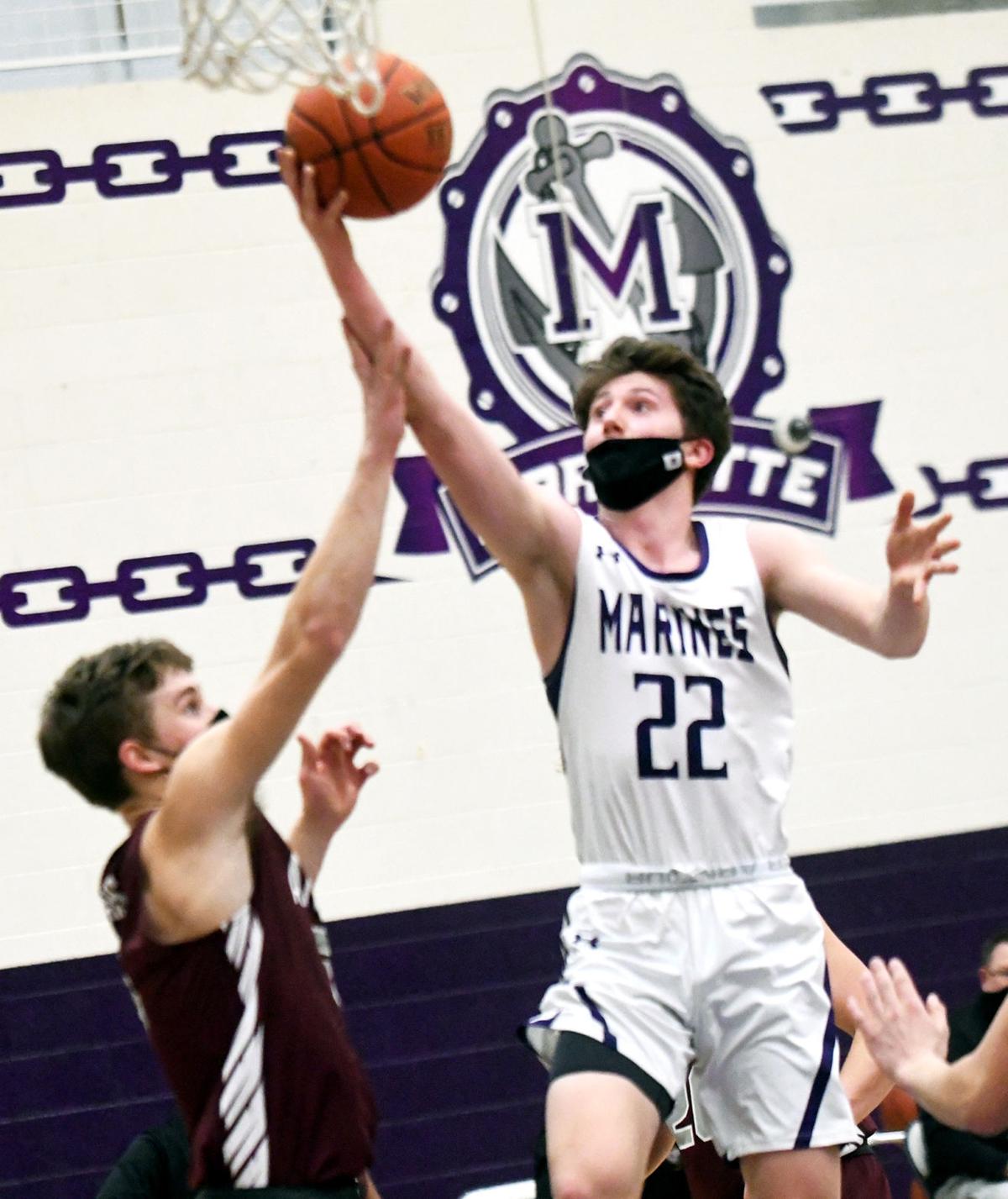 Marinette’s Asaia Polazzo fights through the contact of an Antigo defender and attacks the basket during Tuesday’s WIAA Division 2 Regional game in Marinette. Polazzo recorded a double-double, scoring a career-high 38 points, while collecting 13 rebounds to lead the Marines to an 84-66 victory. 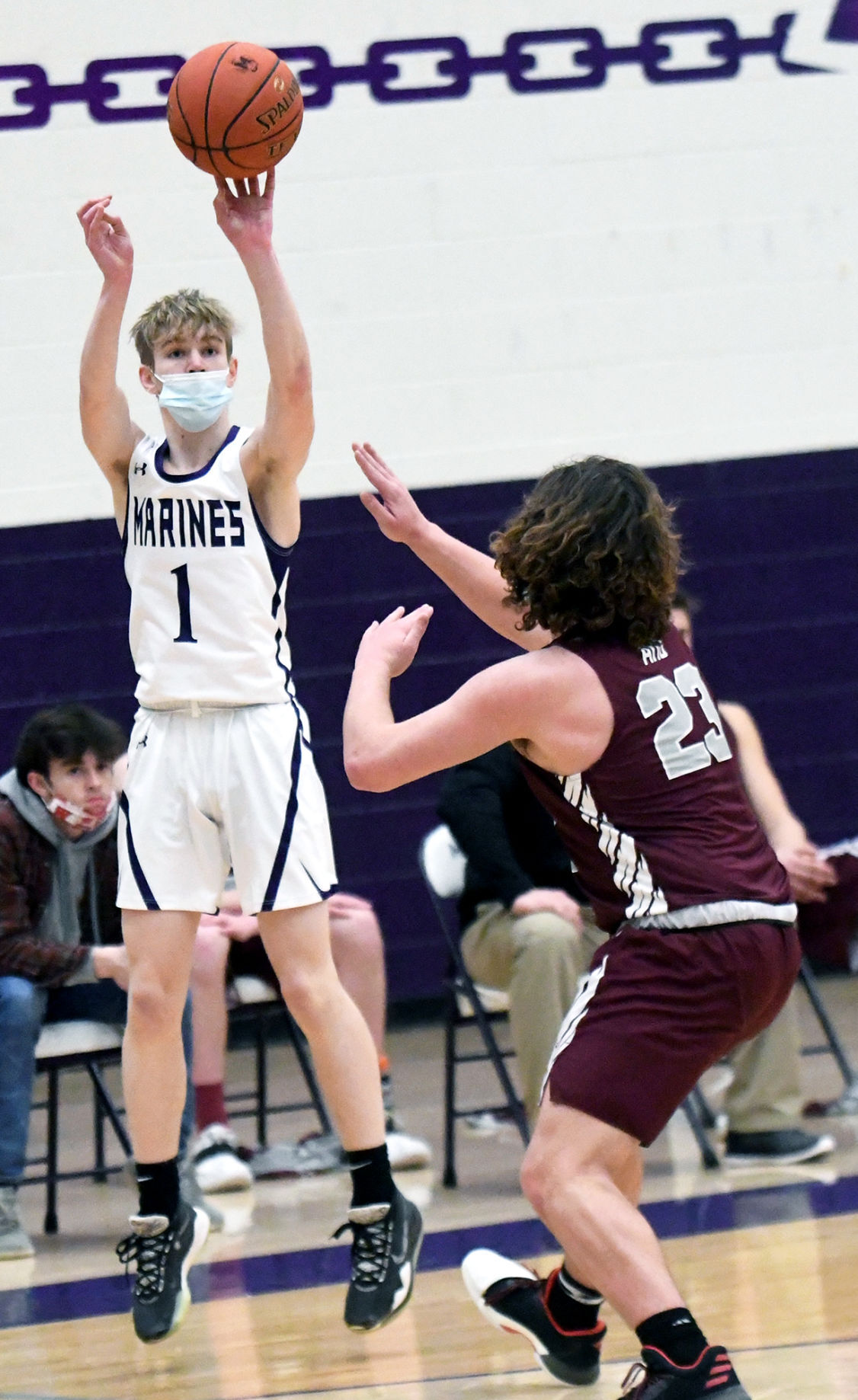 Marinette’s Sam Sommerfeldt rises up and snaps off a 3-pointer in front of an Antigo defender during Tuesday’s WIAA Division 2 Regional game in Marinette.

Marinette’s Asaia Polazzo fights through the contact of an Antigo defender and attacks the basket during Tuesday’s WIAA Division 2 Regional game in Marinette. Polazzo recorded a double-double, scoring a career-high 38 points, while collecting 13 rebounds to lead the Marines to an 84-66 victory.

Marinette’s Sam Sommerfeldt rises up and snaps off a 3-pointer in front of an Antigo defender during Tuesday’s WIAA Division 2 Regional game in Marinette.

MARINETTE—It had been three years since the Marinette boys basketball team hosted a playoff game, and Asaia Polazzo made sure that it was well worth the wait.

The senior forward recorded a double-double, dropping a career-high 38 points on 15-for-25 shooting, while also corralling 13 rebounds and tallying four steals, three assists and two blocks to fuel the No. 4 seeded Marines to an 84-66 victory over Antigo in Tuesday’s WIAA Division 2 Regional quarterfinal game.

“Asaia had the best game of his career and I honestly had no idea he even had that much,” Marinette head coach Matt Joost said. “All of a sudden, (assistant) coach (Matt) Wagner told me that he scored 21 in the first half and I’m just like ‘wow’. He did a great job and was our best rebounder tonight.”

The game was never really in doubt for Marinette as a reverse layup by Carson Erdman opened the game with a reverse layup to give Marinette the early lead that it would not relinquish the entire contest. Two buckets from Polazzo and a deep 3-pointer by Jake Sommerfeldt gave the Marines a 13-5 edge and forced the Red Robins to regroup with a timeout just five minutes into the game.

Antigo cut Marinette’s lead to four behind a triple from Eli Fleischman and a free throw by Jerome Jones, but Polazzo banged home a trey from the left corner before kicking to an open Matt Twork for a mid-range jumper that gave the Marines a 20-9 advantage.

Seven points from Polazzo coupled with a contested 3-pointer by Sam Sommerfeldt put Marinette on top by 17 until a pair of free throws by Fleischman made it a 28-13 game. The Marines responded with Polazzo driving to the rack and kicking to an open Sam Sommerfeldt for a trey before tacking on a layup of his own as Marinette took a 33-13 advantage.

Antigo’s defense managed to stifle the red-hot offense of the Marines for a five-minute stretch as a triple from Fleischman kicked off a 9-3 run for the Red Robins to make it a 10-point game with one minute and 50 seconds left in the first half.

The Marines finally got the lid off the basket when Sam Sommerfeldt pulled up from the same spot on the court as his brother had earlier in the half to drill a 3-pointer before adding another long-range bomb while Polazzo added a triple of his own to help Marinette take a 45-28 lead at halftime.

“We knew that we could get to the basket against them pretty well and we did,” Joost said. “Sam Sommerfeldt hit a couple of huge 3s for us to take that step away from Antigo at halftime. We’ve been on the other end where we would hang around until halftime, Antigo was doing that to us, and Sam came in and hit two shots for us when we needed it. Jake Sommerfeldt as well just played great and consistent all game. He got us into our offense and had one of his best games, shot-selection wise.”

“Defensively I thought we played with good energy even though we had a couple of lulls in the first half. Overall I’m really proud of our effort and we’re playing the best basketball of season right now and that’s all we can ask for.”

Antigo opened up the second half with a layup by Connor Kolz while two baskets from inside the paint by Cole Musolff cut the Red Robins’ deficit to 16. The Marines countered with nine points from Polazzo while Jake Sommerfeldt tacked on a pair of free throws as Marinette’s lead swelled to 28.

Polazzo and Fleischman continued to match each other basket for basket as the two seniors traded 3-pointers while a pair of Jake Sommerfeldt free throws gave the Marines a 30-point cushion with 9:05 remaining. Five points from Fleischman helped Antigo chip away at Marinette’s lead until scores by Polazzo and Jake Sommerfeldt along with a put back from Erdman made it a 76-46 game.

With the game all but wrapped up, the Marines attacked the basket and drew fouls, sending Polazzo, Twork, Braden Bizelle and Dominic Smerchek to the foul line where they shot a combined 8-10. The Red Robins managed to outscore the Marines 17-8 over the five minutes of the game, but it was not enough as Marinette’s defense withstood the final stand by Antigo to secure the victory.

Polazzo and Fleischman combined for an astonishing 72 points between them as Polazzo’s 38 points paced the Marines while Fleischman poured in a team-high 34 points for the Red Robins. Backing up Polazzo’s big game was Jake Sommerfeldt with 16 points while Sam Sommerfeldt added 13 and Erdman chipped in eight. Logan Thomae was Antigo’s second-leading scorer with nine points with Jones and Kaden Stockhauer each adding six.

Marinette’s victory punches its ticket to the semifinal round for a road matchup against old Bay Conference Rival Seymour tonight. The No. 1 seeded Thunder finished the regular season 10-3 mark in the Bay and an 18-6 record overall. Senior guard Mason Dorn, who averages 29 points per game along with eight rebounds and four assists per contest, leads Seymour and Joost knows that containing him will determine Marinette’s success.

“Seymour is very good and they’re the No. 1 seed for a reason,” he said. “Overall they’re a really good team and Dorn is great player that we’re going to focus a lot on. We’re going to have to come out with a lot of energy and let it rip a little bit. We’re going into that game playing confident and we feel like the pressure is on them. With the way we’re playing right now, I’m confident in our chances against anybody and I think we can go into their place and make some noise. It’s going to be a really good game.”